Do you have free will ? 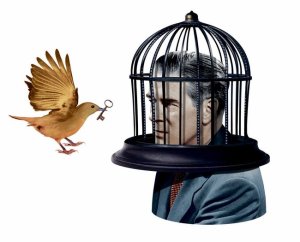 Suppose that Mark and Bill live in a deterministic universe. Everything that happens this morning — like Mark’s decision to wear a blue shirt, or Bill’s latest attempt to comb over his bald spot — is completely caused by whatever happened before it.

If you recreated this universe starting with the Big Bang and let all events proceed exactly the same way until this same morning, then the blue shirt is as inevitable as the comb-over.

Now for questions from experimental philosophers:

1) In this deterministic universe, is it possible for a person to be fully morally responsible for his actions?

2) This year, as he has often done in the past, Mark arranges to cheat on his taxes. Is he is fully morally responsible for his actions?

3) Bill falls in love with his secretary, and he decides that the only way to be with her is to murder his wife and three children. Before leaving on a trip, he arranges for them to be killed while he is away. Is Bill fully morally responsible for his actions?

To a classic philosopher, these are just three versions of the same question about free will. But to the new breed of philosophers who test people’s responses to concepts like determinism, there are crucial differences, as Shaun Nichols explains in the current issue of Science.

Most respondents will absolve the unspecified person in Question 1 from full responsibility for his actions, and a majority will also give Mark a break for his tax chiseling. But not Bill. He’s fully to blame for his heinous crime, according to more than 70 percent of the people queried by Dr. Nichols, an experimental philosopher at the University of Arizona, and his Yale colleague Joshua Knobe.

Is Bill being judged illogically? In one way, yes. The chain of reasoning may seem flawed to some philosophers, and the belief in free will may seem naïve to thepsychologists and neuroscientists who argue that we’re driven by forces beyond our conscious control — an argument that Bill’s lawyer might end up borrowing in court.

But in another way it makes perfect sense to hold Bill fully accountable for murder. His judges pragmatically intuit that regardless of whether free will exists, our society depends on everyone’s believing it does. The benefits of this belief have been demonstrated in other research showing that when people doubt free will, they do worse at their jobs and are less honest.

In one experiment, some people read a passage from Francis Crick, the molecular biologist, asserting that free will is a quaint old notion no longer taken seriously by intellectuals, especially not psychologists and neuroscientists. Afterward, when compared with a control group that read a different passage from Crick (who died in 2004) these people expressed more skepticism about free will — and promptly cut themselves some moral slack while taking a math test.

Asked to solve a series of arithmetic problems in a computerized quiz, they cheated by getting the answers through a glitch in the computer that they’d been asked not to exploit. The supposed glitch, of course, had been put there as a temptation by the researchers, Kathleen Vohs of the University of Minnesota and Jonathan Schooler of the University of California, Santa Barbara.

In a follow-up experiment, the psychologists gave another test in which people were promised $1 for every correct answer — and got to compile their own scores. Just as Dr. Vohs and Dr. Schooler feared, people were more likely to cheat after being exposed beforehand to arguments against free will. These people went home with more unearned cash than did the other people.

This behavior in the lab, the researchers noted, squares with studies in recent decades showing an increase in the number of college students who admit to cheating. During this same period, other studies have shown a weakening in the popular belief in free will (although it’s still widely held).

“Doubting one’s free will may undermine the sense of self as agent,” Dr. Vohs and Dr. Schooler concluded. “Or, perhaps, denying free will simply provides the ultimate excuse to behave as one likes.”

That could include goofing off on the job, according to another study done by Dr. Vohs along with a team of psychologists led by Tyler F. Stillman of Southern Utah University. They went to a day-labor employment agency armed with questionnaires for a sample of workers to fill out confidentially.

These questionnaires were based on a previously developed research instrument called the Free Will and Determinism Scale. The workers were asked how strongly they agreed with statements like “Strength of mind can always overcome the body’s desires” or “People can overcome any obstacles if they truly want to” or “People do not choose to be in the situations they end up in — it just happens.”

The psychologists also measured other factors, including the workers’ general satisfaction with their lives, how energetic they felt, how strongly they endorsed an ethic of hard work. None of these factors was a reliable predictor of their actual performance on the job, as rated by their supervisors. But the higher the workers scored on the scale of belief in free will, the better their ratings on the job.

“Free will guides people’s choices toward being more moral and better performers,” Dr. Vohs said. “It’s adaptive for societies and individuals to hold a belief in free will, as it helps people adhere to cultural codes of conduct that portend healthy, wealthy and happy life outcomes.”

Intellectual concepts of free will can vary enormously, but there seems to be a fairly universal gut belief in the concept starting at a young age. When children age 3 to 5 see a ball rolling into a box, they say that the ball couldn’t have done anything else. But when they see an experimenter put her hand in the box, they insist that she could have done something else.

That belief seems to persist no matter where people grow up, as experimental philosophers have discovered by querying adults in different cultures, including Hong Kong, India, Colombia and the United States. Whatever their cultural differences, people tend to reject the notion that they live in a deterministic world without free will.

They also tend to agree, across cultures, that a hypothetical person in a hypothetically deterministic world would not be responsible for his sins. This same logic explains why they they’ll excuse Mark’s tax evasion, a crime that doesn’t have an obvious victim. But that logic doesn’t hold when people are confronted with what researchers call a “high-affect” transgression, an emotionally upsetting crime like Bill’s murder of his family.

“It’s two different kinds of mechanisms in the brain,” said Alfred Mele, a philosopher at Florida State University who directs  the Big Questions in Free Will project. “If you give people an abstract story and a hypothetical question, you’re priming the theory machine in their head. But their theory might be out of line with their intuitive reaction to a detailed story about someone doing something nasty. As experimenters have shown, the default assumption for people is that we do have free will.”

At an abstract level, people seem to be what philosophers call incompatibilists: those who believe free will is incompatible with determinism. If everything that happens is determined by what happened before, it can seem only logical to conclude you can’t be morally responsible for your next action.

But there is also a school of philosophers — in fact, perhaps the majority school — who consider free will compatible with their definition of determinism. These compatibilists believe that we do make choices, even though these choices are determined by previous events and influences. In the words of Arthur Schopenhauer, “Man can do what he wills, but he cannot will what he wills.”

Does that sound confusing — or ridiculously illogical? Compatibilism isn’t easy to explain. But it seems to jibe with our gut instinct that Bill is morally responsible even though he’s living in a deterministic universe. Dr. Nichols suggests that his experiment with Mark and Bill shows that in our abstract brains we’re incompatibilists, but in our hearts we’re compatibilists.

“This would help explain the persistence of the philosophical dispute over free will and moral responsibility,” Dr. Nichols writes in Science. “Part of the reason that the problem of free will is so resilient is that each philosophical position has a set of psychological mechanisms rooting for it.”

Some scientists like to dismiss the intuitive belief in free will as an exercise in self-delusion — a simple-minded bit of “confabulation,” as Crick put it. But these supposed experts are deluding themselves if they think the question has been resolved. Free will hasn’t been disproved scientifically or philosophically. The more that researchers investigate free will, the more good reasons there are to believe in it.

I am a wanderer and a wonderer, like you are. I love our journey and to walk in the company of friends – to learn, experience, share, laugh, cry and above all I simply love this marvelous, magical, mysterious life. I have no plan (cannot believe I am saying this) and my only intention is to be truthful to myself and others.
View all posts by Michaela →
This entry was posted in Room to Read and tagged choice, Free will. Bookmark the permalink.

3 Responses to Do you have free will ?