I have been born a stone throw away from Dr. Freud’s office in Vienna’s 9th district.

1938, when he was already in his eighties and suffering from mouth cancer, Sigmund Freud was forced by the Nazis to leave Austria. At least he was able to move his possessions to London. He died a year later – as an Englishman.

Many years ago I visited the Freud museum in Hampstead, where he lived during his final year and where his unique collection of furniture and art is on display.  This includes the famous couch, but also a portrait of him by  Salvador Dali, who greatly admired the audacious pioneer of  the unconscious. The image on blotting paper shows Freud’s head based on the shape of a snail.

The surrealists were largely influenced by Freud – and considered him their patron saint. The goal of surrealism was the liberation of man from what they considered the shackles of rational thought. Through writing, poetry, and the visual arts, the surrealists blurred the boundaries between the rational and irrational, reality and fantasy in a search to liberate man’s creativity.

Surrealism’s founder, André Breton became interested in free association and dreams through his study and use of Freud’s psychoanalytical theories and methods during the First World War when he was in the Medical Corp. This experience led Breton to believe that the unconscious could be a source of poetic and artistic imagery as well as source of healing, potentially holding the secret for saving mankind from the brutality that led to war.

Two years later Dali elaborated on the idea of the spiraling snail. Symbolically, snails are about being sensitive and hiding, as much as they are about steady progress, and the spiral form of their shells are symbolic of expanding consciousness. In the study below we can observe Dali’s process of perceiving, the emphasis and elaboration of the ear as the organ of listening, the inquisitive eyes, piercing through layers of compensatory patterns are complemented by a spiraling vortex, reminiscent of a swirling third eye. 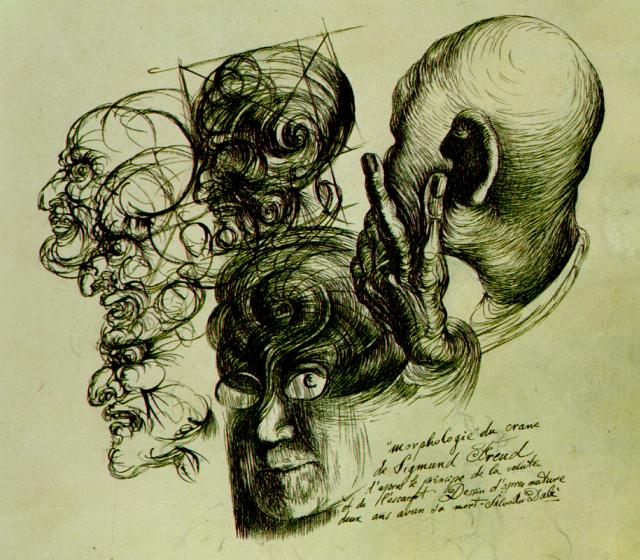 There are three reason why I am mentioning Sigmund Freud at this time: First he was a true pioneer of consciousness, not only applying scientific rigor to his studies of the unconscious, but also coming up with solutions, in particular ” talk therapy” that later developed into psychoanalysis. His theories and ideas, even though influenced by his own experiences and the socio-cultural backdrop of Vienna of 1900, still hold today, but to my knowledge, never have been viewed from a perspective beyond the psychology and pathology of the mind. Carl Jung, his contemporary and opponent, worked on the more intrinsic influences and aspects of evolution and the human mind, and there was a  great controversy in their views of depth psychology. For example, Jung believed that Freud was too focused on sexuality as a motivating force. He also felt that Freud’s concept of the unconscious was limited and overly negative. Instead of simply being a reservoir of repressed thoughts and motivations, as Freud believed, Jung argued that the unconscious could also be a source of creativity.

It appears Freud caught on to that idea. After meeting Dali in London, he said: “Until now I have been inclined to regard the surrealists, who have apparently adopted me as their patron saint, as complete fools. The young Spaniard (Dalí), with his candid, fanatical eyes and his undeniable technical mastery, has changed my estimate. It would indeed be interesting to investigate analytically how he came to create his paintings….”

The third reason is Freud’s keen observation of the relationship and unconscious communication patterns between patient and therapist. Projection, Transference and  Counter-transference are to this very day key components of psychotherapy, but more and more they gain momentum in actually being healing properties offered by the soul.  Transference means the unconscious redirection of the patient’s feelings and attitudes from a person or situation from the past to a person (e.g. therapist) or situation in the present.  Counter-transference means the redirection of the therapists feelings to the patient and includes the feelings evoked in the doctor by the patient’s transference projections

In The Psychology of the Transference, Carl Jung states that within the transference dyad both participants typically experience a variety of opposites, that in love and in psychological growth, the key to success is the ability to endure the tension of the opposites without abandoning the process, and that this tension allows one to grow and to transform.

Freud’s brilliant observation of the interaction between the therapist and the patient, can be further understood, explained and applied through the discovery of mirror neurons, the hard wiring in the brain, connecting our nervous system to the sensory information, internally and externally,  as well as the our musculoskeletal system, where the appropriate response is being exercised.  Essentially, the mirror neurons play out the external actions that we observe in other people, as if we were doing them ourselves. But they also play out what we are imagining ourselves doing, as if we are moving, without the need to actually carry out the movement.

They are, in short, the scientific rationale behind ” Don’t do to others what you would not want others to do to you” and it makes it clear, why the only sane action is to “love the other as yourself”.

Much of my journey of descending into the depth of my own unconscious mind has been in written dialogue with an implicit other, either on an online forum or in private conversations. Over four years that was my practice of enquiry and contemplation. I did experience the power of projection, transference and counter-transference, as well as the full range of transcendence, transformation, transmission and transmutation in myself as a natural interaction and evolution of energy and I will write more about it in a contribution about “Energy Healing”, that I have started to sketch out. Here I just wish to mention that I never knew personally many of the recipients of my contemplations and reflections, debates and challenges. And yet…it was like I knew them, it was like the interaction was real. I remember many instances of the energy on the online forum becoming palpable, occasions of synchronicity  and group dynamics, evolution and shifts of consciousness, at times it was pure magic, even though all we did was to exchange words on a screen.

And it did work. Not only have I been able to look at my own patterns in the mirror others provided, make them detectable and visible, brought them to the surface for enquiry and inspection, but also to  investigated the discernment between what was perceived as myself, and that which I believed was the other. There is not a single instance, I could not trace back an action, issue of circumstance with it’s full spectrum of  emotional entanglement, to myself and my own experiencing.  In the relationship with others we become mirrors and the more open we are, the more conscious we become about our inner life, the power of imagination and the ability to hold the tension between perceived opposites, as opposed to engage in a defensive pattern, the more we become ourselves.

The sufis, who liken the mind to a “palace of mirrors”  and believe the mind as a mirror exists in all beings, have a special place for what they call “reflection”, which really is the work of mirror neurons, in getting the whole idea by using not only the perimeter of language, but also imagination.

Whatever feelings we have we cannot really keep it from another. And this is sufficient for us to know that innermost truth, that absolute truth of the whole universe, that the source is One, the goal is One, and the many are only its covers.

It Is our words which hide reality This is the phenomenon of reflection, reflection of one mind on another. Pleasure and displeasure, affection and irritation, harmony and agitation, all are felt when two beings meet without speaking a word. It is really our words which hide reality. If it were not for our words, the phenomenon of mirroring is such that it would seem as if the whole universe were nothing but a palace of mirrors, one reflecting the other.

Reflection is Not Conversation. Nothing can separate two minds that are focused on one another with love. They can communicate with one another. Distance is never a bar to this phenomenon. Reflection is not like conversation. In a conversation every word unfolds the idea more, and so the idea gradually becomes manifested; but in the reflection, in one instant the whole idea is reflected, because the whole idea is there in the form of a picture, and it is mirrored in the mind which has received it.

And here the circle is closing. All I have been doing is taking notes while following the stream of my imagination. It started with Freud’s cranium, as seen by the surrealist, who believed that the unconscious could be a source of healing and perceived the genius of Freud’s ideas. They were groundbreaking at their time, fin de siècle Vienna, where the  quest to understand the Unconscious in art, mind and brain began and that I feel is my heritage, privilege and gift.

Painting a picture with words, thoughts and associations, this is how I begin to see how everything is related and where my place and purpose may be. I know that we are at the cusp of discovering an integrated approach to healing humanity. It will be done by understanding the power of learning by observation, not only in the realm of analytical thinking , but the actual experience. It will be done by truly understanding communication, not only in terms of  interpersonal relations, but in particular the seemingly ubiquitous  disturbances and pathology. It will be done by cultivating the art of listening and actively using art to access the full scope of human experiences in order to connect with a broad range of feelings, to allow the communion with emotional expressions that we cannot access on our own.  Yes, it is a vision, but it is one that is becoming a reality quickly. What it requires is the cooperation of pioneers and map makers, gifted healers, artists, teachers, poets, philosophers and mystics. Those who are not satisfied with the world as it appears today, but see and feel the possibility of another reality.

A reality where the human becomes the remedy for humanity.

I am a wanderer and a wonderer, like you are. I love our journey and to walk in the company of friends – to learn, experience, share, laugh, cry and above all I simply love this marvelous, magical, mysterious life. I have no plan (cannot believe I am saying this) and my only intention is to be truthful to myself and others.
View all posts by Michaela →
This entry was posted in Finding the golden Thread. Bookmark the permalink.