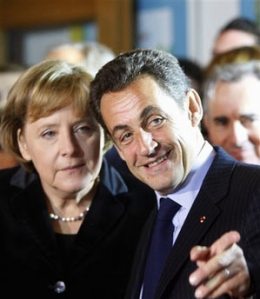 By N Kulish and S Erlanger

The latest bailout in the Greek rescue has all the elements of what is fast becoming almost commonplace European intrigue.

The French president arranges a private summit meeting with the German chancellor. Europe’s top central banker resists calls to allow Greece to write off some debt, fearing it could undermine the euro. The Greeks cry out that their sovereignty is infringed.

And only when markets teeter toward panic is a deal finally reached in Brussels to stave off more attacks on the euro zone’s vulnerable southern countries and prevent, for the moment at least, a broader run on financial markets.

The dramatic elements in the latest round of messy European compromise are not in themselves new. The question is whether the deal reached Thursday for another Greek bailout, this time valued at $157 billion, and relief for Portugal and Ireland is a decisive step to calm Europe’s financial storm or simply postpones another reckoning for the weakest southern European economies and the euro itself.

The consensus emerging is that European leaders went farther than ever before, crossing even their own red lines to shelter their decade-old currency. But many also worry that the intensive bargaining necessary to make an agreement possible resulted in a weak accord, saving face for all the key parties.

Jean Pisani-Ferry, director of Bruegel, an economic research institution in Brussels, said Thursday’s meeting “clarifies the horizon and pushes it forward.” But relief was not the same as solutions, Mr. Pisani-Ferry said, adding that he thought the private sector had not made enough concessions for the long run. Greece is almost sure to need further debt restructuring, he said.

The deal involved delicate compromises from all parties, especially Chancellor Angela Merkel of Germany and the European Central Bank. Each gave something and could claim a prize as well. The Europeans eased the burden on Greece, gave a modest bill to the private financial institutions and empowered a European-wide fund to act more broadly to buy up bad debt. The moves seemed to appease the markets, for now.

Babis Papadimitriou, an analyst for the Kathimerini newspaper in Greece, warned that its government had not shown great skill at putting into effect measures it had approved, including the opening up of closed professions and the privatization of over $70 billion in state assets.

The issues are political as much as economic. European democracy is fraught with the complications of 27 member nations, 17 of which use the euro, plus European institutions with shifting responsibilities. It was all on display in this crisis — internal German politics, the qualms of the European Central Bank, the plight of the Greeks and market anxieties over Italy and Spain, which are too big to bail out.

The biggest sticking point in reaching a broader accord to relieve Greece of some of its crippling burden of debt is Germany, where Mrs. Merkel has steadfastly resisted using European resources — meaning the wealth of Germany and other relatively prosperous members of the union — to write down Greek debt. Past bailouts provided new loans to Greece to help it pay off old ones, but ultimately just added to the country’s overall debt load.

But as markets swooned again this past week, pressure mounted in Germany. Even members of her own party attacked her with a ferocity unseen during the slowly unfolding crisis, saying she was jeopardizing European unity. President Obama called Mrs. Merkel on Tuesday to remind her how fragile the world financial system had become and of Germany’s responsibility.

Jean-Claude Trichet, president of the European Central Bank, was also pressed to consider steps he had previously insisted were impossible. On Wednesday, he called the bank’s 23-member governing council together in the bank’s high-rise headquarters in Frankfurt to discuss allowing the first default by a country that uses the euro.

Though staunchly opposed to compelling private banks to share the costs on Greece, which would mean at least a partial default in the eyes of bond rating agencies, the members of the bank council recognized that Germany was determined that any new bailout involve some pain for the private sector. But the council would insist on several conditions. European countries must guarantee Greek bonds so they will remain eligible as collateral for central bank lending. The bloc must support Greek banks and step up assistance for Greece’s economy.

And if private investors took losses on their holdings of Greek debt, that step must not been seen as a precedent that might be extended to other nations like Ireland or Portugal. “It should be unique,” said a bank official.

President Nicolas Sarkozy of France was described as worried that Mrs. Merkel might not even attend the meeting Thursday. They had spoken by phone in what he described as a “sterile” conversation. He decided to fly to Berlin Wednesday afternoon.

“I need to deploy my energy,” Mr. Sarkozy told his cabinet before leaving, “but at the same time I need to not hurt anyone’s feelings.”

After negotiating all afternoon and into the night, they were joined around 10 p.m. by Mr. Trichet, who had come from Frankfurt, and a call was placed to Herman Van Rompuy, president of the European Council. The meeting ended past midnight.

A possible deal had been reached, but Mr. Trichet left looking unhappy, as the French daily newspaper Le Monde reported. He had been cajoled into accepting the possibility of a selective default, meaning an organized write-down of some debt.

Everyone had to give something up. Mr. Sarkozy let go of his plan to tax banks to pay for bailout funds. Mrs. Merkel accepted a reinforcement and expansion of the region’s rescue fund, called the European Financial Stability Facility. The fund would be allowed to buy sovereign debt on the secondary market and from the European Central Bank.

The fund would also stand ready to inject new capital into troubled European banks. It would be instructed to tender its loans at a wholesale price, with none of the punitive extra interest Mrs. Merkel once favored.

The fund would begin to look like a European monetary fund, making all euro zone taxpayers responsible for guaranteeing most of the debts of countries like Greece, Portugal and Ireland. German officials and voters were cool to the idea. But not as wary as the austerity-beaten Greeks to further deep spending cuts.

The 20-member Greek delegation arrived the day before the meeting with significant apprehension. Until Thursday evening they were not sure they would get a deal. Evangelos Venizelos, the finance minister, met with Josef Ackermann, chief of Deutsche Bank and chairman of the International Institute of Finance, the international bank group.

Mr. Ackermann acted as an intermediary between politicians and bankers, knowing it was impossible “to bring this package through Parliament without private sector participation,” as he told German television.

Mr. Ackermann’s involvement helped clear the way for big private banks to accept a modest write-down on the value of their Greek bonds. And a meeting over Gummi bears, cookies and a thermos of coffee between Mrs. Merkel, Mr. Sarkozy and George A. Papandreou, prime minister of Greece, opened the door to a broader agreement that other European nations might accept.

After opening statements at the Thursday summit, José Manuel Barroso, president of the European Commission, said the crisis had not been handled correctly. “We should have solved some of these issues before,” he said, according to a senior European Commission official.

But a diplomat said the financial stakes seemed higher this time. Mrs. Merkel and Mr. Sarkozy “were speaking with one voice,” the diplomat said.

The Dutch and Finnish delegations inserted language demanding that the Greeks secure loans with buildings, land and companies slated for privatization. “We are a sovereign country, not a company,” said one member of the Greek delegation. “It was very insulting.” Mr. Papandreou made it clear that would create a political crisis at home, possibly prompting the government’s fall.

Mrs. Merkel won contributions from private banks she desperately wanted, but let the euro zone slide closer to the sort of economic government that German taxpayers abhor. Her shift reflected growing panic at home that her dithering had endangered the European integration project central to German policy since the end of World War II.

While the European Central Bank conceded on private sector participation and the prospect of a selective default on Greek debt, the bank achieved its goal of tightening euro area fiscal discipline and shifting responsibility for supporting Greece to European countries. The pact also allows the European stability fund to buy European government debt in open markets, relieving the central bank of that task.

Mr. Sarkozy, for his part, hailed the new powers for the stability fund as “the initiation of a European monetary fund,” a longstanding French goal.

As she faced reporters in Berlin Friday, Mrs. Merkel seemed confident. “All of Europe has undertaken reforms that a year and a half ago would not have been conceivable,” she said, pointing to the higher retirement age in Spain, the sale of state-owned assets in Greece, savings packages in Ireland and Italy and even a new commitment in France to bring down its budget deficits.

“You have to tackle the problem at the root,” she said.

I am a wanderer and a wonderer, like you are. I love our journey and to walk in the company of friends – to learn, experience, share, laugh, cry and above all I simply love this marvelous, magical, mysterious life. I have no plan (cannot believe I am saying this) and my only intention is to be truthful to myself and others.
View all posts by Michaela →
This entry was posted in The world we live in Now and tagged Angela Merkel, European Central Bank, European Financial Stability Facility, European Union, European unity, Nicholas Sarkozy. Bookmark the permalink.