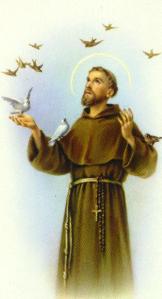 On our way home from a wonderful long walk this afternoon, my friend and I suddenly passed by an elderly lady sitting on a step. She seemed to have injured herself and could not stand up. Obviously she had broken the neck of her femur. We called the ambulance and kept her company. Three ladies and a dog sitting on a step in the sun on a bright spring afternoon waiting for the ambulance.

„I just prayed to Francis of Assisi, who always helps when one of my pets is ill, and a doctor came by (my friend is a M.D.). So lucky me.“ she said with a wry smile.

She told us that she once wanted to become a nun and had lived in a convent for some time. But actually she became a nurse. „If I would have become a nun, this would not have happened to me, I would not have broken my leg. But as I actually became a nurse I even know now that something is really wrong with my leg. What do you think – should I do another pray to Francis of Assisi that I won’t have to stay in hospital for too long ?“

And she prayed and all in a sudden her neighboor appeared and promised to care for her pets.

Then the ambulance arrived and they took her to hospital.

Adorable lady – we wish her all the best. Maybe we pay her a visit in a few weeks.

This entry was posted in Uncategorized. Bookmark the permalink.

1 Response to Francis of Assisi