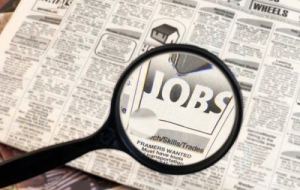 WITH unemployment stubbornly high and an August jobs report showing no net job creation, some people might argue that American workers should be happy with whatever employment they can get. But others are making a very different argument, prompted in part by the presidential campaign of Texas Governor Rick Perry, who is touting the state’s record of job creation during his time in office. In their view, job creation during Mr Perry’s tenure has been heavy on minimum-wage “jobettes”, and growth in the number of those jobs—jobs where a full-time worker won’t necessarily make a living wage—is nothing to brag about.

With regard to Texas, I’m not sure the premise is correct. About 9.5% of Texas’s hourly workers are paid at or below the federal minimum wage, compared to 6% of hourly workers in the nation as a whole, meaning that Texas and Mississippi are tied for the highest shareof such workers. That’s not great, but it’s also not entirely surprising, given the demographic and historical characteristics of the Texas workforce; also, more than a dozen states set the minimum wage higher than the federal standard, so you would expect very few of their workers to earn the same as or less than the federal standard, and for the national share to shrink accordingly. In any case, Texas’s job creation has not been mostly about bottom-barrel jobs; at Democracy in America, I break it downby industry.

But let’s put Texas aside. The question is: how much of a priority should be placed on the quality of new jobs? I took up this question with Paul Osterman, an economist at MIT and the co-author of the new book “Good Jobs America: Making Work Better for Everyone”. (We had also discussed this question earlier in the day, as panelists on NPR’s On Point.) His general argument is that the national conversation should be more focused on quality job creation rather than job creation, period.

Mr Osterman defines a quality job in wage terms, as work that pays at least two-thirds of median wage or, alternatively, enough to keep a family of four above the poverty line. That sounds modest, but is actually relatively ambitious. The Census Bureau released its latestpoverty numberstoday; 15% of Americans are living below the poverty line, the highest level in nearly 20 years.

It should be said that a “good job” depends on the context—the cost of living, the educational attainment of the workforce, the historical poverty rate, etc. I would also argue that good jobs are contextual. We know that rural unemployment is higher than the jobless rate in the cities, for example, and that youth unemployment is about twice the national average. States might be wise to focus on creating jobs for those subpopulations, even if the jobs thereby created don’t pay as much as those that might result from, say, giving a tax break to a software firm. Still, I agree with the intuition at work here.

In any case, however we’re defining good jobs, Mr Osterman argues that the government has some tools at its disposal to support them. For example, he says that if a state is going to give a company a tax break in exchange for its relocation, they might make it conditional on a promise that the company will pay a living wage (as it stands, states tend to offer such incentives on the basis of promises about how many jobs will be created). The states could start enforcing measures that are already on the books, such as overtime provisions, or they could chip in for expanded workforce training programmes.

One blunt instrument is the minimum wage. Barack Obama’s new economic advisor, the microeconomist Alan Krueger, is most well-known for his researchshowing that, contrary to popular wisdom, raising the minimum wage doesn’t necessarily lead to less employment. It’s still a controversial policy, and Mr Osterman reckons that an increase would never get through Congress. However, he argues in favour of the idea. “We’ve never been willing to say, ‘drive the price of labor down to the lowest possible level,’” he says. “People realise that it’s a different market than the market for pork bellies or whatever.” The private sector might balk, Mr Osterman argued, but for a company like Wal-Mart—the “quintessential low-wage employer”—a higher minimum wage would effectively mean a transfer of money from shareholders to workers.

Worker welfare isn’t the only reason to care about wage levels. Higher wages across the board would save the government some money in aid programmes, for example. And some protections and benefits for workers actually help employers by, for example, reducing turnover. There are some companies that pride themselves on being “good places to work”, even though many of the jobs they offer don’t require an advanced degree or anything like that; the Container Store comes to mind, as does Whole Foods.

One final thought. For policymakers, a troubling part of this good jobs versus bad jobs question is that it’s a bit of a false choice. If the (state or federal government) were to adopt the measures people like Mr Osterman suggest, what’s to stop those companies from taking their business elsewhere? As my colleague Matthew Bishop explains in this week’s special reporton the future of jobs, the structural drivers of current unemployment heavily affect blue-collar and routine white-collar work:

Even before the crisis, America was on track for its worst decade for job creation in at least half a century, says Mr Manyika of the McKinsey Global Institute. As the institute sees it, there are three main types of work: transformational (typically involving physical activity, such as construction); transactional (such as routine jobs in call centres or banks, often still done by people but capable of being automated); and interactional (relying on knowledge, expertise and collaboration with others, such as investment banking or management consultancy). Transformational work has been in long-term decline in most rich countries, shifting to emerging markets, particularly China, though wages in Chinese factories are now soaring.

Now a wave of labour arbitrage and the substitution of technology for humans is starting to sweep through transactional work, wiping out many routine white-collar jobs in rich countries.

That will, of course, strike many Americans as a scary prospect. It occurs to me, though, that it might lead some people to think about jobs differently. Companies can’t outsource all the jobs, obviously. Some of them are stuck here. And if those that are destined to stick around are made better—that is, if they pay a higher wage, or if they include more benefits and labour protections—one job might actually be enough to keep a family of four out of poverty.

I am a wanderer and a wonderer, like you are. I love our journey and to walk in the company of friends – to learn, experience, share, laugh, cry and above all I simply love this marvelous, magical, mysterious life. I have no plan (cannot believe I am saying this) and my only intention is to be truthful to myself and others.
View all posts by Michaela →
This entry was posted in The world we live in Now and tagged Employment, Job creation program, Labor, Minimum wage. Bookmark the permalink.