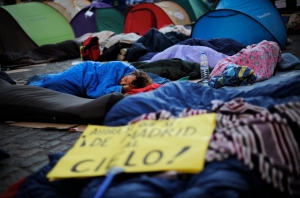 Anger, irritation, annoyance and even rage are some of the most common adjectives used by protestors camping atPlaza del Sol in Madrid.

The massive series of demonstrations that started on May 15 gathered people from all classes and ages. Mothers came with their children; professors and lawyers gave improvised speeches at every corner of the plaza, protesters started building tents and other facilities.

The 15M movement or “Real Democracy Now – DYR” – started as a public outcry denouncing political corruption and unemployment that has soared to unprecedented levels. Some 25 per cent of the labour force can’t find a job and almost 50 per cent of young people are unemployed.

They united against what they see as an outrageous situation produced by bankers and politicians.

Nerea, an active demonstrator with some physical disabilities, put it this way: “Right now we have political corruption, banks that are abusing our people, there is not access to housing and we can’t find proper jobs. I’m a graphic designer and I’m studying advertising and the only job the administration offers me is to become a teleoperator.”

Nerea’s views are just one of many similar claims that we find among protesters in Madrid, Barcelona, Seville, Valencia and other major cities. People also began to demonstrate in front of the Spanish embassies in Berlin, New York, Egypt and Ecuador.

Joan, a Spanish demonstrator, protesting in front of the Spanish Embassy in Quito, Ecuador, commented: “This is not a demonstration against the socialist government of Rodriguez Zapatero. The problem is that democracy does not care about the interests of the people anymore. Powerful people, banks and corporations have sneaked between us and the politicians.”

“We know how to do it; we know how to organise ourselves. This is a way to demonstrate to our politicians that the people are smarter than they think.”

This is perhaps one of the most striking and interesting features of this mobilisation. Participants were organising in situ small assemblies where people could discuss the goals and aspirations of this movement – or this “revolution”, as some of the protestors have begun to call it.

They set up various tents in Madrid’s Plaza del Sol – each starting working on different aspects of the movement: legal advice, communication, cleaning, catering, a library and even a kindergarten, so families could bring their children to the gathering. These committees and workshops were very similar to those that sprang up during the massive demonstration at Tahrir Square.

It was clear that their goal was to go beyond traditional demonstrations that take place in a given moment and place and then are dissolved.

“This is a more complicated and far more reaching action,” said one organiser.

The platform wanted to consolidate the revolutionary character of the movement by likening it to the Arab uprisings unfolding across the Middle East in places such as Tunisia and Egypt. An Egyptian flag was posted on the biggest statue in the Plaza; posters were hung calling for solidarity with Palestinians and the Polisario Front (the independence movement for the people of the Western Sahara). They wanted to take Plaza del Sol – one of Madrid’s most significant squares – and make it their stronghold until their voices were heard.

The organisation was outstanding and helped the movement to develop faster and stronger. This is the opinion of Mario, activist and participant in one of the many workshops organised by the people: “Here, there are people with a lot of talent and expertise … We are not just a bunch of punks, there are university professors, masters students, and other professionals.”

“I am participating in a political workshop and there is one professor from France, another from the United States and two from Madrid. People come around and they think: ‘How cool and nice is this?’ But the most important things are the workshops that are taking place. In these workshops, we are formulating the ideas and goals that we want to achieve.”

One of the major achievements of the movement so far has been to stay at the Plaza del Sol, despite the government orders to dismantle the camp. After three days of protests, the provincial electoral commission of Madrid banned the gathering, arguing that Spanish law prohibits any political campaign to take place the day before elections.

The commission thought that the demonstration could be influencing people’s decisions and consequently security forces started controlling the access to the square. The core of the movement repeatedly denied this accusation and, after the commission took the decision, the number of participants grew considerably.

At this point, the government couldn’t do anything about it and the police and security forces refrained from taking further action.

Protesters succeeded in catching the attention of the public – the elections and popular frustration did the rest. Their banners and slogans convinced a wider spectrum of the population, and thousands more people joined the demonstration.

The government, overwhelmed by the situation, started to modify some of its previous positions. The minister of interior and Vice-President Alfredo Perez Rubalcaba cancelled his electoral campaign in order to “manage the crisis”. Rubalcaba declared to the press that “the police will act according to the principles of consistency, opportunity and proportionality”, and added that “where there is a problem, we shouldn’t create one, two or three”.

On the other hand, Spanish president Jose Luis Rodríguez Zapatero, commented to the press – after days of silence – just before his speech at the electoral campaign in Seville: “We should consider the concentration at Plaza del Solas a phenomenon of democratic expression.”

Then he recognised that part of the problem lay in the economic crisis, the high level of unemployment and the lack of affordable housing. At the end he added, “this protest shouldn’t have a direct impact on the polls. This protest goes beyond the electoral process”.

The president’s forecast proved to be wrong and in the provincial election on Sunday, the socialist party (PSOE) led by Zapatero had one of the worst results in their recent history. The PSOE lost around 2 million votes while the right-wing People’s Party obtained unprecedented support from the electorate in key provinces of the state.

Government officials and party members that I have had the opportunity to speak with avoided making any official statement – in a clear attempt to close ranks around their leader.

A manifesto for change

The movement continued its protest the day after the elections and released a manifesto – in several different languages – stating their main goals and aspiration: “This situation has become normal, a daily suffering, without hope. But if we join forces, we can change it. It’s time to change things, time to build a better society together.”

Its conclusion states: “We need an ethical revolution. Instead of placing money above human beings, we shall put it back to our service. We are people, not products. I am not a product of what I buy, why I buy and who I buy from.”

The manifesto fails to make any concrete proposal to end the crisis – and it would be premature to consider this movement a revolution such as those taking place in Tunisia, Egypt, Yemen, Libya, Syria, and Bahrain.

Luis, an active participant in the protest, said: “Our situation is very different than in the Arab world. They are fighting for freedom against cruel dictatorships. Their struggle has more merit that our campaign, and they are risking their lives … Also their goals seem to be different as well.”

Nerea, Luis, Aurora and Mario have the same opinion about the movement and think that this mobilisation does not have the same goals of the Arab revolutions – and therefore they are not seeking to force the resignation of the president or any of his ministers.

Mario argued that the goals are very clear: “We would like to see radical changes in our political model. For instance, we don’t want to have politicians that keep making decisions based on the stock market and we would like to change how judges and other officials are appointed.”

Political analysts and specialists agree that the movement had great initial success during the week before the elections, but doubt their success in the long term.

Ignacio Molina, associate professor in the department of politics and international relations at the Universidad Autónoma de Madrid, believes that the movement is limited and focus their claims too narrowly on matters of political theory.

“In other words, protesters are naive enough to think that changing the political model on institutional issues such as the republican form of government, participatory democracy or the proportional electoral system can help resolve the crisis and improve the life prospects of young people or the unemployed,” he said.

However, other specialists such as Jaime Pastor, professor at the department of political science and administration in the National University of Distance Education (UNED), consider that political and economic reform should go hand in hand – but argues that the movement is now at a crucial state.

“Protestors have at least established a series of basic goals. But now, after the election, it remains to be seen if they are able to keep the flame alive.”

What seems to be clear is that the movement has, so far, succeeded in awakening the Spanish youth that were mired in a prolonged slumber. According to many participants, the movement will continue – regardless of election results.

Mario mentioned that there was a plan to move the protest out of the plaza and that they were thinking to start working at a “grassroots” level, organising committees and assemblies across the city’s neighbourhoods. He added that people in France and London had already contacted members of the committees.

“We are discussing many issues related to policies and regulations that concerns everybody in the European Union.” Mario says.

It is undeniable that protestors have received wide support from the population, and it has proved – so far – to have a considerable impact on Spanish politics as well. The strength of the movement lies in their capacity to mobilise a large percentage of the youth. This ability could be crucial in next year’s presidential elections.

However, the government’s mistake to underestimate the power of protest – in addition to the tendency among protestors to remain apolitical – has been capitalised by the right wing opposition, which gains popularity each day.

Ironically, the presidential election may yield a very different change than that which the protesters filling plazas across the country desire.

Daniel F Rivera is an Arab philologist, blogger and translator. He is currently a EU-PhD candidate at the Universidad Autónoma de Madrid.

I am a wanderer and a wonderer, like you are. I love our journey and to walk in the company of friends – to learn, experience, share, laugh, cry and above all I simply love this marvelous, magical, mysterious life. I have no plan (cannot believe I am saying this) and my only intention is to be truthful to myself and others.
View all posts by Michaela →
This entry was posted in The world we live in Now and tagged Madrid, Protest, Spain, Unemployment. Bookmark the permalink.