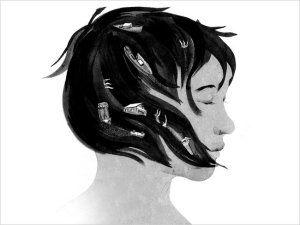 I  set out from my home in the port city of Yokohama early in the afternoon last Friday, and shortly before 3 p.m. I checked into my hotel in the Shinjuku neighborhood of Tokyo. I usually spend three or four days a week there to write, gather material and take care of other business.

The earthquake hit just as I entered my room. Thinking I might end up trapped beneath rubble, I grabbed a container of water, a carton of cookies and a bottle of brandy and dived beneath the sturdily built writing desk. Now that I think about it, I don’t suppose there would have been time to savor a last taste of brandy if the 30-story hotel had fallen down around me. But taking even this much of a countermeasure kept sheer panic at bay.

Before long an emergency announcement came over the P.A. system: “This hotel is constructed to be absolutely earthquake-proof. There is no danger of the building collapsing. Please do not attempt to leave the hotel.” This was repeated several times. At first I wondered if it was true. Wasn’t the management merely trying to keep people calm?

And it was then that, without really thinking about it, I adopted my fundamental stance toward this disaster: For the present, at least, I would trust the words of people and organizations with better information and more knowledge of the situation than I. I decided to believe the building wouldn’t fall. And it didn’t.

The Japanese are often said to abide faithfully by the rules of the “group” and to be adept at forming cooperative systems in the face of great adversity. That would be hard to deny today. Valiant rescue and relief efforts continue nonstop, and no looting has been reported.

Away from the eyes of the group, however, we also have a tendency to behave egoistically — almost as if in rebellion. And we are experiencing that too: Necessities like rice and water and bread have disappeared from supermarkets and convenience stores. Gas stations are out of fuel. There is panic buying and hoarding. Loyalty to the group is being tested.

At present, though, our greatest concern is the crisis at the nuclear reactors in Fukushima. There is a mass of confused and conflicting information. Some say the situation is worse than Three Mile Island, but not as bad as Chernobyl; others say that winds carrying radioactive iodine are headed for Tokyo, and that everyone should remain indoors and eat lots of kelp, which contains plenty of safe iodine, which helps prevent the absorbtion of the radioactive element. An American friend advised me to flee to western Japan.

Some people are leaving Tokyo, but most remain. “I have to work,” some say. “I have my friends here, and my pets.” Others reason, “Even if it becomes a Chernobyl-class catastrophe, Fukushima is 170 miles from Tokyo.”

My parents are in western Japan, in Kyushu, but I don’t plan to flee there. I want to remain here, side by side with my family and friends and all the victims of the disaster. I want to somehow lend them courage, just as they are lending courage to me.

And, for now, I want to continue the stance I took in my hotel room: I will trust the words of better-informed people and organizations, especially scientists, doctors and engineers whom I read online. Their opinions and judgments do not receive wide news coverage. But the information is objective and accurate, and I trust it more than anything else I hear.

Ten years ago I wrote a novel in which a middle-school student, delivering a speech before Parliament, says: “This country has everything. You can find whatever you want here. The only thing you can’t find is hope.”

One might say the opposite today: evacuation centers are facing serious shortages of food, water and medicine; there are shortages of goods and power in the Tokyo area as well. Our way of life is threatened, and the government and utility companies have not responded adequately.

But for all we’ve lost, hope is in fact one thing we Japanese have regained. The great earthquake and tsunami have robbed us of many lives and resources. But we who were so intoxicated with our own prosperity have once again planted the seed of hope. So I choose to believe.

Ryu Murakami is the author of “Popular Hits of the Showa Era.” This article was translated by Ralph F. McCarthy from the Japanese.

I am a wanderer and a wonderer, like you are. I love our journey and to walk in the company of friends – to learn, experience, share, laugh, cry and above all I simply love this marvelous, magical, mysterious life. I have no plan (cannot believe I am saying this) and my only intention is to be truthful to myself and others.
View all posts by Michaela →
This entry was posted in The world we live in Now and tagged Fukushima Prefecture, Hope, Japan, Tokyo. Bookmark the permalink.