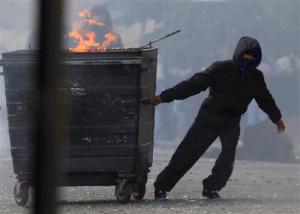 From the New York Times

Nothing can justify or excuse the terrifying wave of violent lawlessness that swept through London and other British cities earlier this month. Hardworking people in struggling neighborhoods were its principal victims. Public support for racial and ethnic coexistence also suffered a damaging, and we fear lasting, blow.

The perpetrators must be punished, the police must improve their riot control techniques, and Prime Minister David Cameron’s government must do all it can to make such episodes less likely in the future. We are more confident about the first two happening than the third.

Mr. Cameron, a product of Britain’s upper classes and schools, has blamed the looting and burning on a compound of national moral decline, bad parenting and perverse inner-city subcultures.

Would he find similar blame — this time in the culture of the well housed and well off — for Britain’s recent tabloid phone hacking scandals or the egregious abuse of expense accounts by members of Parliament?

Crimes are crimes whoever commits them. And the duty of government is to protect the law-abiding, not to engage in simplistic and divisive moralizing that fails to distinguish between criminals, victims and helpless relatives and bystanders.

The thousands who were arrested last week for looting and for more violent crimes should face the penalties that are prescribed by law. But Mr. Cameron is not content to stop there. He talks about cutting off government benefits even to minor offenders and evicting them — and, in a repellent form of collective punishment, perhaps their families, too — from the publicly supported housing in which one of every six Britons lives.

He has also called for blocking access to social networks like Twitter during future outbreaks. And he has cheered on the excessive sentences some judges have been handing out for even minor offenses.

Making poor people poorer will not make them less likely to steal. Making them, or their families, homeless will not promote respect for the law. Trying to shut down the Internet in neighborhoods would be an appalling violation of civil liberties and a threat to public safety, denying vital real-time information to frightened residents.

Britain’s urban wastelands need constructive attention from the Cameron government, not just punishment. His government’s wrongheaded austerity policies have meant fewer public sector jobs and social services. Even police strength is scheduled to be cut. The poor are generally more dependent on government than the affluent, so they have been hit the hardest.

What Britain’s sputtering economy really needs is short-term stimulus, not more budget cutting. Unfortunately, there is no sign that Mr. Cameron has figured that out. But, at a minimum, burdens need to be more fairly shared between rich and poor — not as a reward to anyone, but because it is right.

Fair play is one traditional British value we have always admired. And one we fear is increasingly at risk.

I am a wanderer and a wonderer, like you are. I love our journey and to walk in the company of friends – to learn, experience, share, laugh, cry and above all I simply love this marvelous, magical, mysterious life. I have no plan (cannot believe I am saying this) and my only intention is to be truthful to myself and others.
View all posts by Michaela →
This entry was posted in The world we live in Now and tagged austerity program, crime and punishment, David Cameron, Democracy, Riots, social media. Bookmark the permalink.