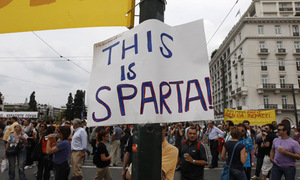 Greece is broke. Thats hardly newsworthy, because Greece has been broke since I can remember. Just the fact that Greece is broke and unable to repay it’s debt, by itself is not that much of a problem. It’s a small country, with a relatively small contribution to the European Union and even if Greece defaulted on it’s debt – the European Union could easily compensate for it.

The problem is that Greece has become a domino and there are fears that it’s default could topple the global economy. It’s not so much a crisis of the ability of Greece to sustain itself, it’s a crisis of market economy, political structures, financial systems,. not in Greece – but on European and global basis.

Meanwhile the Greek took to the streets to protest their governments, rejecting austerity packages. The debt crisis morphed into a societal momentum of the the people standing up against corruption, complacency, squander and denial.

Here is hope that the birthplace of democracy will again lead us towards a transformation of the way we will hold governments – and ourselves – accountable for decisions. Outraged by previous budget reductions, thousands of Greeks have filled Syntagma Square in the heart of Athens over the last three weeks in protest.  The number ballooned to about 30,000 people, including members of the country’s two largest labor unions, which staged a 24-hour nationwide strike.

Their issues ? Unemployment, corruption, rising living costs, a stalling economy and all the other symptoms of a disease called greed. Hunger and impoverishments are the great awakeners from illusion and deceit. We see the same all over the world now. Tharir square, Plaza del Sol or Syntagma Square – we see people rising and waking up to truth and their own ability and power to stand up for it.

I am a wanderer and a wonderer, like you are. I love our journey and to walk in the company of friends – to learn, experience, share, laugh, cry and above all I simply love this marvelous, magical, mysterious life. I have no plan (cannot believe I am saying this) and my only intention is to be truthful to myself and others.
View all posts by Michaela →
This entry was posted in The world we live in Now and tagged European Union, Greece, International Monetary Fund, Syntagma Square. Bookmark the permalink.