The audience fell silent, long before the prophet entered the stage.

It was a small theater, a group of maybe 200 people, that had come together to listen to the words of the teacher. The event was to be recorded and there were several camera men, operating heavy equipment.

The stage was dark, with exception of the lights on the centre, illuminating the familiar setting: a simple chair and a narrow table with a flower arrangement.

The chatting and small noises in the audience came all to an halt. There was a palpable suspense in the silence, and everyone felt the need to gather their attention, become aware and still. It is impressive how much it can be felt, when the enrgy in the room is changing.

I was sitting somewhere in the middle, next to a friend who had joined me for the occasion. We had crossed an ocean and a continent to come to that place, a city between the ocean and the sky, the clouds and the mountains. It was a long, but still pleasant journey and we have had a day of rest and long walks in the rain, before we came to the place, where the prophet was about to give a lecture to a small audience.

We sat in silence and it was then when I suddenly noticed that state of relaxed attention, that feels so natural – and yet is so elusive. It was just lovely to sit there quietly, eyes on the set on the stage, but being aware of everything around.

It was like the presence of the prophet had entered long before him.

After a few introductory words by the organizers, the room fell silent once again and you could sense the level of energy going up once again. The astounding sensation was like the room vibrated in synchronicity, becoming aware of the energy field that we are.

Then the prophet entered. In his signature cashmere sweater (pumpkin orange the first day, pistachio green the second) he walked slowly and deliberately across the stage, folding his hands to greet the audience. He looks frail, nearly translucent. A small frame and round-back, a deformity that must cause him pain and discomfort in certain positions. He sat down on the chair and took some time to become aware of the audience. 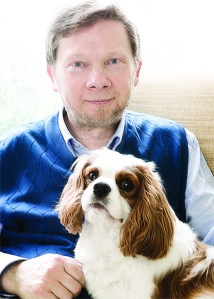 He started to speak. Slowly at first, in a low voice that was actually not easily understood from where I was sitting. But soon his talking became more forceful. pronounced and his voice rose. The state of relaxed alertness held the whole time.

I will not recapitulate what he said – it was a talk on aversion and how to deal with apparent negativity, or tragedy in one’s own life or the collective. He spoke about 90 minutes, always coming back to, and pointing out the madness of the mind, the great trickster that is creating a reality, that is just not true. But also pointing to the great power in all of us, that is waiting for us to be in tune, to receive it’s guidance and direction.

There was not a sound to be heard while he talked. The audience was relaxed, laughed and simply joined in and followed the movements of energy.

There were different activities throughout the two days, even the opportunity to ask direct questions, as well as the pleasure of watching a guest speaker, entering the flow and engaging in a true and compassionate interaction. There was nothing willed, or artificial in the conversation of the prophet and his guest – a well known author, who has written about his own personal encounter with God.

I had an opportunity to ask my own question – about faith in the sense Jesus spoke of, when he said a little faith could move mountains. In his answer he, who spends so much time and focus on being present, finally spoke about the Power (of Now).

Life is a Play. It is not meant to be safe, but it is also not meant to limit ourselves for a false sense of security. His invitation was to be ready to align ourselves with the Source and let the play begin and enjoy the endless possibilities ( spinning galaxies, was one metaphor I remember – he spoke of the character Q from Startrek – an omnipotent individual, who unfortunately had a also a big ego.)

The encounter with the prophet was simple, it was pure – and yet it was very powerful. There is something like an extremely kind, yet omnipotent force that emanates from the little hunched figure, who is nothing but changing the world, sitting in his chair.

No concept, no symbols, no stories – just a few pointers. Just Truth.

The effect of being in the presence of a highly evolved individual, someone who has opened himself up so selflessly, completely and humbly, for Life to come through him is nothing but radical.

As for me, I dwelled on a very enjoyable higher frequency for a few days, with a clear mind, an open heart and a sense of safety, I do not normally feel. But to be lifted up like this obviously also caused some deep and unconscious dark patterns to break free and coming to the surface. I was surprised by the vehemence and intensity, but I also realised I had just built some more capacity and stamina to take on more – aversion.

I do understand now, why some people react erratic, after such an encounter. It moves you forward, and even tough Eckhart and other teachers primarily speak of the peaceful state within, they do not as readily speak of the shadows, that need to be encountered on this journey. I understood we do have a choice in this – it is either to allow what is within us and is generally called “unpleasant” , to rise freely – or it does manifest as an obstacle on the outside.

Doesn’t make a difference for Life, but for me – it does.

So I have a sense, meeting the prophet has spared me quite a few real-life stumbling blocks now. Honestly – I rather look at something that in the end is just an energy, as opposed to having to deal with it as an adversity, that manifested based on my own aversion to that very feeling, I wanted to avoid.

PS: Oh, and my sincere gratitude goes to Kim Eng, the wife of the prophet. Without her, there would not be any of this. No teachings, no recordings, no ETTV. I really would like to acknowledge that, also her brave efforts to step in and teach, next to a spiritual immensity, like Eckhart Tolle.

I am a wanderer and a wonderer, like you are. I love our journey and to walk in the company of friends – to learn, experience, share, laugh, cry and above all I simply love this marvelous, magical, mysterious life. I have no plan (cannot believe I am saying this) and my only intention is to be truthful to myself and others.
View all posts by Michaela →
This entry was posted in Seeing myself in you, Teacher & Teachings, The Crystal Mirror and tagged A New Earth, Eckhart Tolle, Prophet, The Power of Now. Bookmark the permalink.

5 Responses to Meeting the Prophet