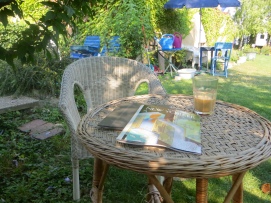 It was a hot and lazy summer.
For days and weeks the temperature held well over 30 Celsius and, on some days, even peaked as high as 38 degrees. Nobody felt like moving, eating or even thinking too much. We just went about the most important chores in the coolness of the early morning and then spent the rest of the day reading and sleeping in the shade.

There were early signs of things to come, as you can often recognize  in hindsight. One of them was a curious encounter with Dhumavati Devi,  an aspect of the Divine Mother, said to manifest herself at the time of cosmic dissolution. She is also described as the giver of Siddhis, or supernatural powers and I remember connecting with her symbol and power. 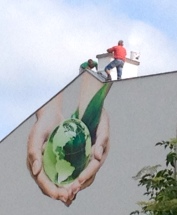 Another clue was the mural on the wall of a neighbouring house, that can be seen from the back of our garden. It shows two hands lovingly offering a green globe, like a sapling. I often contemplated this image, because it felt to me like the universe wanted to hand me a gift, and lo and behold, in the first few weeks of this summer, I observed roofers at work, seemingly repairing and flashing the chimneys above the image. It felt to me like a connection was opened and the gift finally made available. 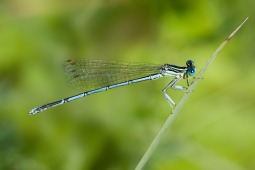 The third evidence of things to come were the  many beautiful and iridescent blue dragon flies hovering above the little pond in my garden. They were such a wonderful sight to behold, at once graceful and mysterious, predators with strong, yet transparent and delicate wings. I sat there many mornings, marveling at their sapphire presence, enchanting my splendid solitude in a summery scene.

And then came the day the gift arrived.

It was book that I felt prompted to buy. The inspiration came from a friend, who on a previous occasion, had quoted the author.  There was something that made me look him up, and this is how I found out about his writings. The title of the book is : Gene Keys by Richard Rudd.

Immediately after starting to read I felt a recognition. It was like a door had opened and I was literally given the keys to unlock more of the mystery surrounding me. I also felt I could not simply read the book, a monumental work of 600 pages,  in a linear fashion, but much rather play with it, allow it to take me deeper, to teach me, and to reveal it’s wisdom in it’s own pace.

I started to  learn about the author, a teacher, mystic and poet from England, with a very unusual and dedicated life path. I picked up on his fascination with Human Design, a synthesis of several ancient systems, integrating elements of the Tao the Ching, the Kabbalah, the Vedic Chakra System and Astrology.  I have been familiar with it for a while, but never felt drawn to go below the surface. But now, prompted by the Gene Keys, I felt a calling to go back to the origins and soon I started to look at charts and graphs, lines, channels, circuits and gates.

I will not go into detail about the Human Design System, because it is a science in it’s own right, yet this is not what I am prompted to study, it actually feels the other way round: Human Design is teaching me. And so, by applying it, I start to see the energetic imprint, the unique foundation, that constitutes the energetic schema, of you will, of a human being. In other words – it is a map and the blue print of human experience.

Human design goes back to mystical origin and a very mysterious man, Ra Uru Hu, who received the teaching from a Voice in 1987 on the island of Ibiza. He spent the rest of his life teaching, and by now Human Design has reached some popularity. It is possible, with the right information, to go incredibly deep into one’s energetic wiring and retrieve information for all walks of life. But this is not what interests me so much at this stage. It is rather this line, from Ra Uru Hu, who said:

“Everybody has a unique mythology that they live out in their life. That is them, their incarnation. When you live out your strategy, you discover your mythology, you get to see your purpose, your value.”

The gene keys cover the 64 gates of the Human design system and they are the key parameters of each chart. At the time of birth, and for the purpose of the standard body graph also 3 months before, a set of gates are activated by the planets. This determines a number conscious (personality) and unconscious (design) energy centers and channels, a quantum field between two polarised gates. 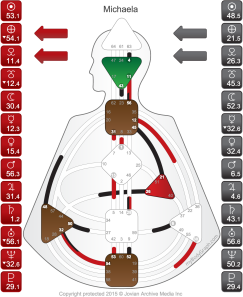 This is my body-graph based on my astrological birth data. It explained so much to me, where I have been conditioned and where I have my own strength. It did not require much, just a little bit of adaptation and all of a sudden, my life was more in flow than I have ever experienced before. There is great relief to discover your own energetic blue-print, but what is more, to receive guidance to go deeper into the wisdom of the gates and channels, that reveal one’s life path, potential and purpose.

Perhaps I will feel inspired to go into detail about some of the gates and pathways, to share an example of my own information and insight, but for now, I leave the reader with the  impression of my design.

While I sat and immersed myself in the teachings of the Gene Keys and Human Design, something else happened, that I think is relevant, as an outer symbol of an inner development: the refugees

We first saw them in early summer. Young men who slept by the river, carried nothing but small backpacks, and threw away used clothes. I found a hand-knitted sweater left at the fence of out house and it touched me. Someone had made this for someone else. Knittings are always personal, and now it was left behind, torn and dirty. I wondered about the story of this sweater, that kept someone warm on their journey from the Mediterranean shores of Greece to our leafy street in the outskirts of Vienna. Then, we saw more and more refugees coming, groups of men and women, often with children, passing, on their way to the next train station or looking for a shelter, and soon there were thousands, then ten of thousands, crossing the borders every day. I have seen migration and refugees before, from the former Czechoslovakia to the Balkans, we have always had quite an open and integrative attitude. 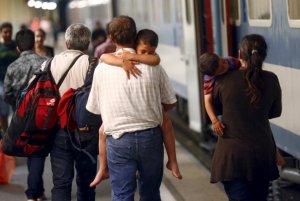 The subject dominated the media and politics and the ensuing debate was not always fair nor was it pretty. But there was also a spontaneous outpouring of compassion, charity and hospitality. It seemed the country, as well as  the neighbouring states, were emotionally divided. There were those who whole-heartedly embraced and there were those who angrily rejected, but somehow, even though there was a lot of backlash, mistakes and many ill-considered decisions, it still appears to me that an integration is happening, on many levels of society, because the truth, as always, lies in between the two opposites.

To me the refugees represent an important symbolism. It is about people having lost of what they had , having left behind more than their material safety. It is people who have gone through war, atrocities, unimaginable terror. It is about trauma made visible and this is what scares us so. In all of us, Central Europe, but certainly also in other parts of the world, we carry the trauma of generations, and we have lost the art of integrating the unimaginable, through story telling, through art and through compassion. Trauma is a greek word, meaning wound, and this wound can be felt in all of us. Trauma has been called a frozen piece of time, and it is transferred across people, nations, generations. Small frozen pieces of time that is made manifest in our thoughts, fears and actions, and that we tend to put to sleep, through medication, distraction or addiction.

I will, of course, explore more of this, as it is becoming my theme and purpose. How to uncover those frozen pieces of time, how to tap into the energy trauma, so we can use it’s wisdom for healing. And I wish to end this part of the exploration, that covers summer and fall of 2015, with the mention of a site that I admire and love: Humans of New York. Brandon Stanton is a photographer who went out to take pictures of people on the streets of New York and began to tell their stories. By the end of the year 2015 he began to run a series of refugees and their stories and it caused an unparalleled response of kindness and philantrophy. Humans of New York has an astounding  following of 16 million souls and it seems to be a quite effective community, without the confines and limitations of  a charitable organization. To me this is how we are going to connect and shape our world in the future. Not unlike a flock of birds coming together for a murmuration, following currents, touching for a brief moment, and then going on, but their impact lasting forever.