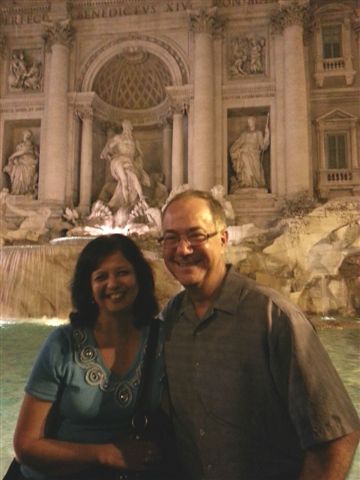 From Rome with Love: Benno & Delyse

What an experience….hard to put into words!

There were between 4 and 5 hundred people. Out of that I only ran in to maybe 3 or 4 that actually ever posted on the forum. So thats’s a surprise to me,  of course there are many more ‘silent member’s’ that ‘read only’ category, how many ….who knows? And then the rest who never set foot on the forum at all, but join for the talks/resources.

Having Delyse my wife with me was actually incredibly beautiful and I feel so lucky and grateful beyond words. This trip was the most fulfilling trip of my life….in just so many ways .  We ‘ve both changed and grown so much since over the past few years .

We also made some great friends along the way…..Susan from Alabama….Mai from Denmark especially. Also Chris (Wish) from Holland. John and William from Ottawa ,Canada. Igor from Edmonton Alberta. Sergio from London. Kennith and Leah musicians from the USA and many others whose names escape me. Many were met only once as we sat with different people at meals.

Oldriska…… OMG!….how did I fail to recognize you!!
Anyway it was so great to finally meet you….wish it would have been sooner so we could talk a bit more….but still happy you recognized me….or my name on the last day and we could meet even briefly.

THE RETREAT WITH ECKHART & KIM 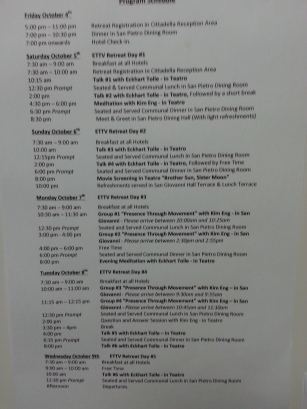 Eckhart talks about leaving behind our problems.
How coming here doesn’t necessarily help since we carry our problems and conditioning in our minds.
How living life in the mind can never be peacful let alone fulfilling.
As long as we believe we are the story in our head about who we are ….then we are that.
What we se and percieve with our senses gets interpreted through the lense of the mind.
We need to transcend mind by simply seeing or realizing that we Are the awareness.
When looking at the world of form ,know that what you see is superficial.
Looking with Pure Awareness …that is without the filter of the mind allows us to see the essence in whatever form….which is …ultatimately the same as our own. 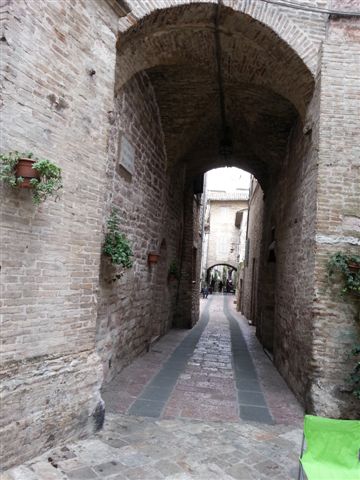 Eckhart starts by talking about St. Francis…his life and his path.
Then how ego often takes credit for spiritual growth.  How easy it is for that to happen.  Guess that’s what’s meant by spiritual ego.
He talks about 2 paths…
1- How you must want awaken like a drowning man wants air.
2-Says, there is nothing you can do, its all up to the Absolute so may as well just have a beer and relax sit tight and wait till waking up just happens….its out of our hands.
Eckart then says yes we need some passion in the direction of awakening and we also need to act….do whatever is necessary to facilitate the process. Both are needed.
He also came out with a statement …given the state of the planet in decay….the state of Human consciousness and its impact on the life of our planet. He says …..”Everything is well” Even amidst all the chaos and decay the Unmanifested remains unaffected by form.
He goes on to say ….It might come to pass that the Earth (which is conscious ) may decide that humans should go and a new life form will be created…but not to matter since in our essence we are not the form.

Another example of the street scape

Kim talked about awareness…..how awareness gets hijacked by the mind and before we know it we’re lost in mind stuff.
How negative energy can have a powerful affect on the body. Sometimes leading to illness if not cleared .  When it manifest in our body…its important to become aware of it and realize it likely has a mental componant as well.
Focusing awareness on the body helps release blocked energy.
Energy/chi/prana is meant to flow…not be stagnant.
I’ve got written here bowl analogy? Hmm. Something like…. We are not the bowl (form) but the space within.  Of course there is no within or without. The space within the bowl is always inseparable from the space outside the bowl. Also she mentions that what’s important about a bowl is the space within.
Kim also talks about Yin/Yang and balancing the two….manifesting/creating/doing (Yang)…and the unmanifested/formless (Yin).
When we are (yang) we should always balance it with some (Yin)….and the same holds true if we are (Yin). That way we never get drawn in to form completely and also helps keep those that tend to withdraw from the world of form to have some grounding.

Us with San Fransesco church in the background.

Chosen Questions were answered….(2 or 3 people that had their questions chosen mysteriously disappeared, so in all  there were only 3 then a open mic.
I won’t give his answers…but hope that by putting the questions out there now, later when the video comes out people will have time to see how what they in terms of an answer  compares to Eckharts ‘.

Q 1
Many traditions such as Buddhism and Hinduism preach compassion for all sentient beings…and there is the mistreatment of animals …What do you have to say on this matter?
(On the last day someone asks a similar question)

Q2
The women asks how to overcome extreme trauma in ones life?

Q3
Susan from Alabama asks. What is Charisma? It seems to manifest itself in both good people and even in evil.

Q4
Lady from Turkey asks,  I find that when I am ‘present’ my speech slows down. Is this normal….people think there is something wrong, or that I am strange. Is this normal?

I am a natural Doctor and have a problem with the way mainstream medicine treats the symptoms rather then the disease. Gives example where anti depp. Meds were given out before really knowing why the person was experiencing symptoms of depression.

Q6
I find that when I lose presence, I spend enormous energy trying to become present again. It gets so frustrating, I say to myself screw it!

Q7
As we awaken do we not become naturally more compassionate, and therefore more likely to steer (no pun intended) twords becoming a vegetarian? And are you Eckhart a vegetarian?

Q8
How do I deal with betrayal in my life?

Q9
The awakening process seems to bring out ones deep seated painbody. Do you not talk about it because you didn’t experience that in your very rapid awakening?

There might very well be some questios I missed, especially if I had trouble understanding what was said or was more of a comment then a question…or just unclear.

Questions were recorded from memory later, I appologize if I somehow framed it wrong. If anyone that was there can add or clarify they are most welcome to do so. 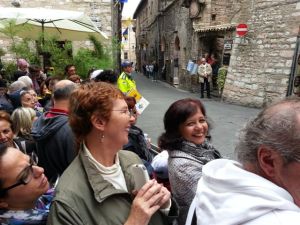 Waiting for the pope 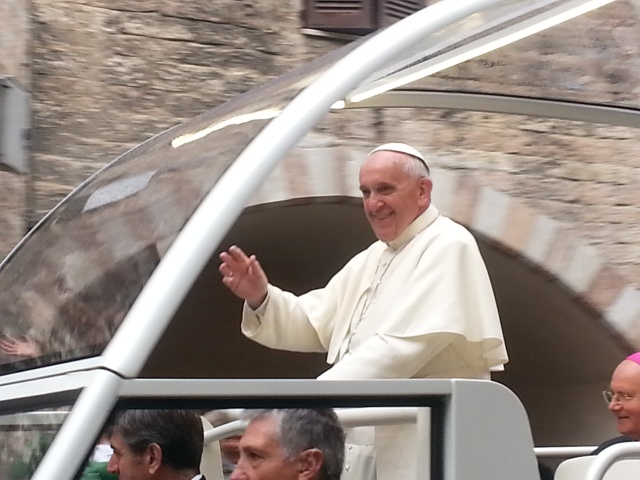 The pope in Assisi 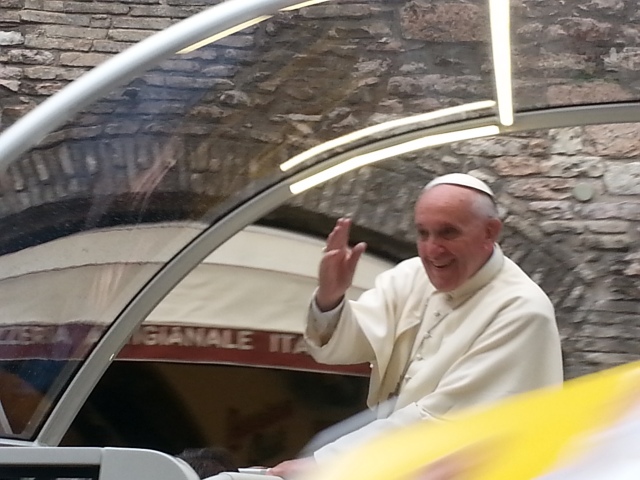 This entry was posted in The Armchair. Bookmark the permalink.

6 Responses to Eckhart in Assisi